A configurational effective Hamiltonian expresses the energy of a crystal as a function of the occupation of the sites of the crystal:

When is this a good approximation?

What does an occupation variable, $\sigma_{n}$, represent?

How many distinct configurations are there?

Ground state properties of a crystal, such as energy or volume at zero Kelvin, can be expressed as a function of the type of occupant on each site in the crystal.

Given an appropriate choice of initial crystal, in most cases the atoms will stay close enough to the original site that the site occupations are a good label for the ground state. In some cases, an initial state may involve atoms relaxing so far they end up closer to a different crystal site. In these cases, the ground state is most appropriately labeled with a different occupation.

A general tensor product expansion has a basis set consisting of polynomial functions of the value of the occupation of all sites in the crystal:

Note that Eq. (1) is completely general; it does not include any consideration of symmetry. Sanchez et al. [2] showed how contruct a complete, orthogonal basis set that takes advantage of crystal symmetries and can be extended to any number of components. 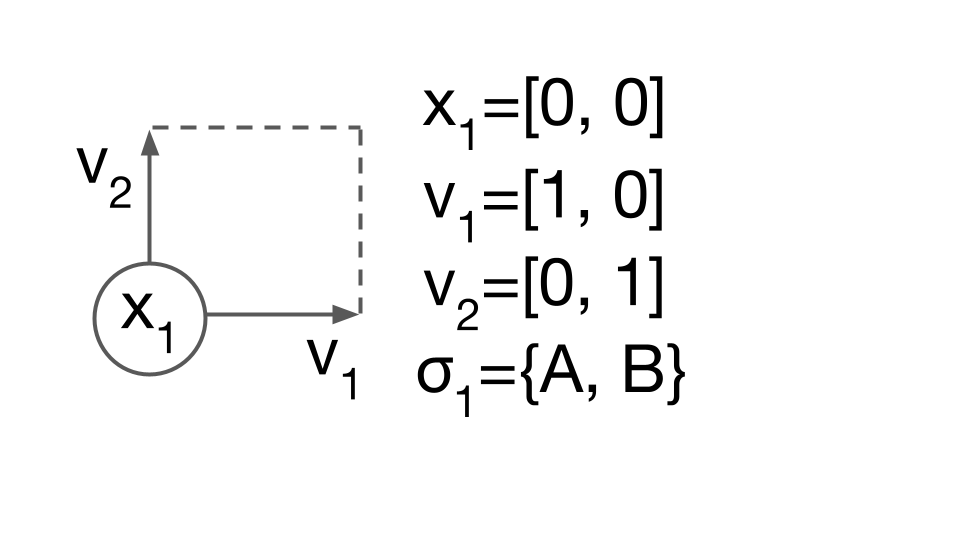 Consider using Eq. (1) to describe a finite “binary alloy” of species A and B, in a perfect 2 dimensional square arrangement. The primitive description of this system includes the lattice vectors, $v_1, v_2$, the position of the site, $x_1$, and the species allowed on the site, $\sigma_1={A,B}$. In CASM, this primitive description of the crystal structure and allowed degrees of freedom (DoF) is called the “prim”.

Next consider a square supercell of the “prim”, with four sites labeled as follows: 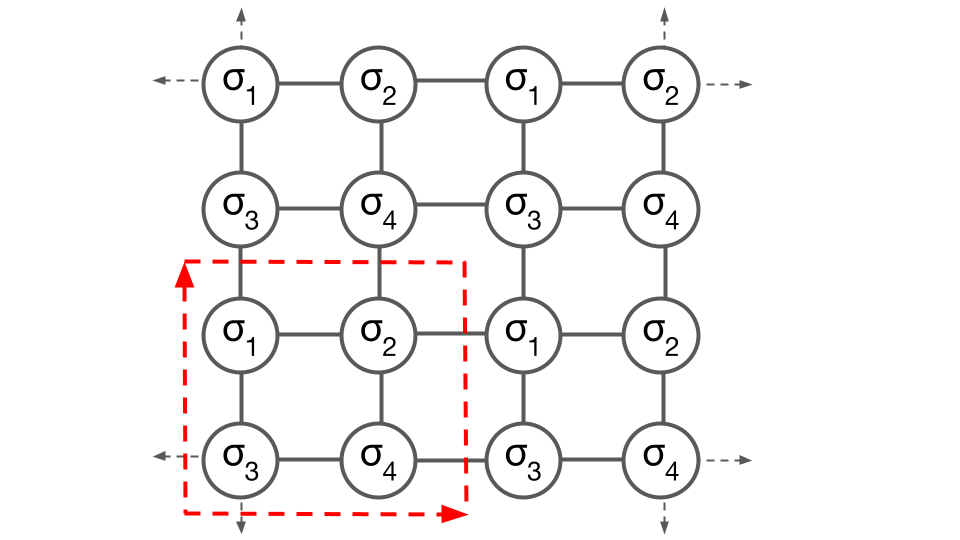 The specification of a supercell of the prim restricts configurations to particular symmetries and a limited number of orderings, but does not yet specify any particular ordering.

To specify a particular configuration, the value of the occupant at each site within the supercell must be specified. In the following example, the configuration is $[B, A, A, A]$: 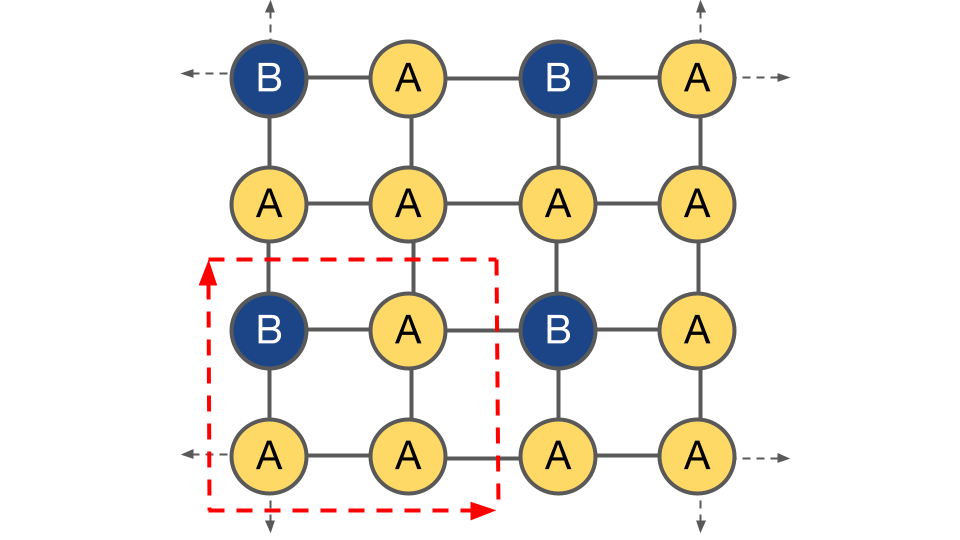 Within this supercell, there are six “orbits” of symmetrically unique configurations, $\Omega_{\vec{\sigma}}$: 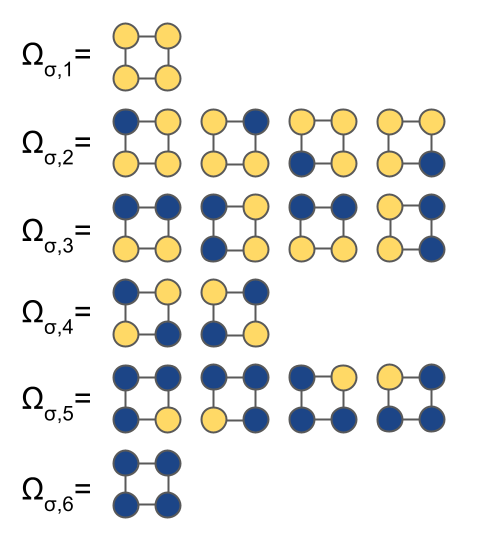 Site basis functions provide support for the, in this example, $2^N=16$ polynomial functions, needed to form a complete basis for the properties of the $2^N=16$ possible configurations.

To select suitable site basis functions, $\phi(n, m_{n}, \sigma_{n})$, note that since all sites are symmetrically equivalent, $\phi$ does not vary with $n$. In a crystal with multiple sublattices, we may need different $\phi$ on each sublattice.

As we will see, this choice results in an expansion around the properties of the pure A configuration. Other choices of site basis functions can result in an expansion around other configurations, the random alloy, a particular set of average sublattice compositions. Depending on the use case, a good choice of site basis functions may result in faster convergence of the expansion.

Symmetry results in there being six orbits, $\Omega$, of equivalent vectors of $\vec{m}$, each of which label an orbit of crystal basis functions which must have equivalent interactions:

When storing configurations in a project, CASM by convention keeps only the “canonical form” of symmetrically equivalent configurations, defined as the occupant labels, $\vec{m}$, that has the highest lexicographical order.

Following the choice of $\phi$ and enumeration of $\vec{m}$, we can write out all of crystal site basis functions:

where for the sake of clarity we take advantage of the fact that for a binary alloy $\sigma_n$ can be used as shorthand for $\phi(0, 1, \sigma_{n})$.

By choosing a constant value of $\phi=1$ for $m_n=0$, the expansion no longer need to explicitly evaluate the value of the site basis functions at every site. The crystal basis functions now only depend on particular clusters of sites and can be call cluster basis functions. 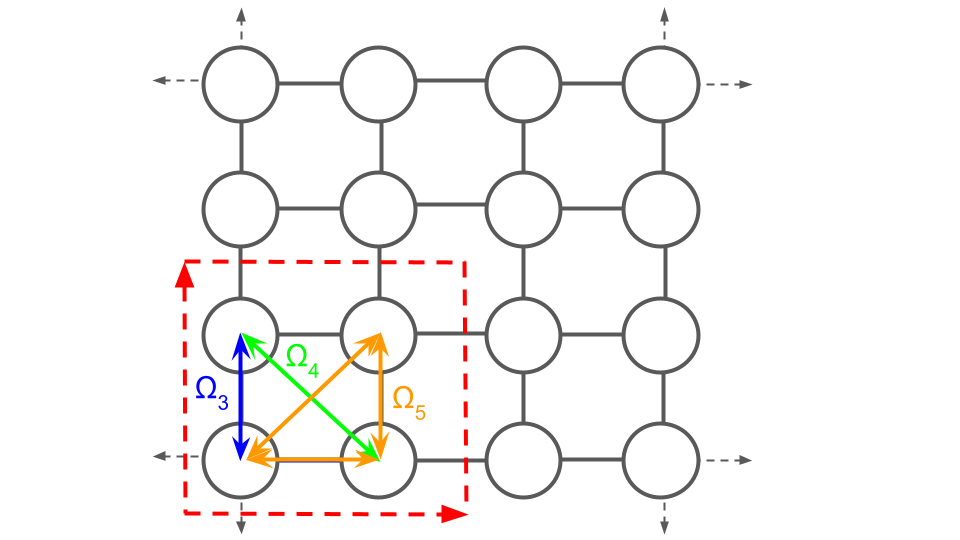 Next we define the “correlations”, $\Gamma_\alpha(\vec{\sigma})$, the average value of an orbit of crystal basis functions:

Thus, a vector of correlations can be calculated that is identical for each symmetically equivalent configuration. In this system, with the choice of “occupation” site basis functions, the correlations (with columns labeled by a “prototype” cluster basis function in the corresponding orbit) are:

This table is the correlation matrix for the six symmetrically unique configurations.

From the previous example, it should be clear that the proper choice of site basis functions and use of symmetry allows writing a cluster expansion effective Hamiltonian as:

A cluster expansion is often a good choice for an effective Hamiltonian because: